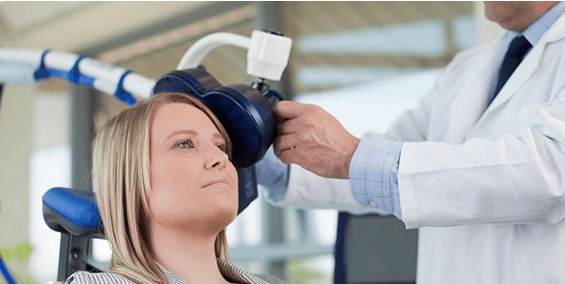 Clinical depression is a growing problem in America today. As pharmaceutical companies race to come up with new wonder drugs for the treatment of depressive disorders, alternative therapies are also being investigated for the possibility of safer and more reliable solutions. One such therapy is TMS, which is short for “Transcranial Magnetic Stimulation.” Is TMS safe? What are the side effects of TMS? First, let’s get some background.

Why TMS is a Good Alternative to Pharmaceuticals?

Transcranial Magnetic Stimulation is a non-invasive approach that has a lasting positive effect within the brain of a patient with depression. It uses MRI-strength magnetic coils to direct precise magnetic pulses, which help to regulate the brain’s own electrical activity. Areas of the brain which are less active in patients with depression are gently encouraged toward a level of normal electrical activity, rather than having their function kicked into overdrive through the use of drugs.

There are few glaring downfalls with antidepressants, and not to say that they are not an important treatment to consider. However, short-term/long-term effectiveness, side effects, and cost are a big concern.

Side effects alone can have debilitating consequences. Also, 70% of alternative therapies have a better chance of beating depression for good compared to pharmaceuticals.

TMS therapy on the other hand works with stimulating the brain’s neurons in a very localized portion of the brain and the brain takes over from there, naturally building neurotransmitters and communicating for the release of “happy hormones”. TMS merely jump-starts the brain into its natural action. TMS is not introducing any chemicals and does adversely interact with any medication.

This is a treatment option that one can do without worrying about interfering with other types of treatment.

At TMS Health and Wellness in Orange County, we augment the TMS therapy with inner resource tools such as meditation and self-compassion training. These modalities have been proven to not only stimulate similar areas of the brain as TMS but also are used as long-term preventative measures. Keeping those new neural pathways open for the life of the patient.

So What are the TMS Side Effects?

TMS side effects can happen but are very infrequent. If you’ve ever had an MRI, you’ve already experienced the general function of this form of depression therapy. The difference is that TMS only affects the head, with its magnetic pulses being targeted with pinpoint precision at specific parts of the brain.

Headaches: Rarely, patients undergoing this form of magnetic stimulation may experience headaches during or shortly after the application of the magnetic field. These headaches are usually very mild, requiring small doses of over the county medications to remedy.

Seizures: Very rarely, patients may experience seizures in response to this treatment. During clinical trials, none of the 10,000 patients experienced a seizure. In the approximately 60,000 applications of the therapy which have occurred since only one seizure has been reported. The remote likelihood of a seizure is at least partly based on the presence of certain medications, which can affect the brain’s electrical activity in and of itself.